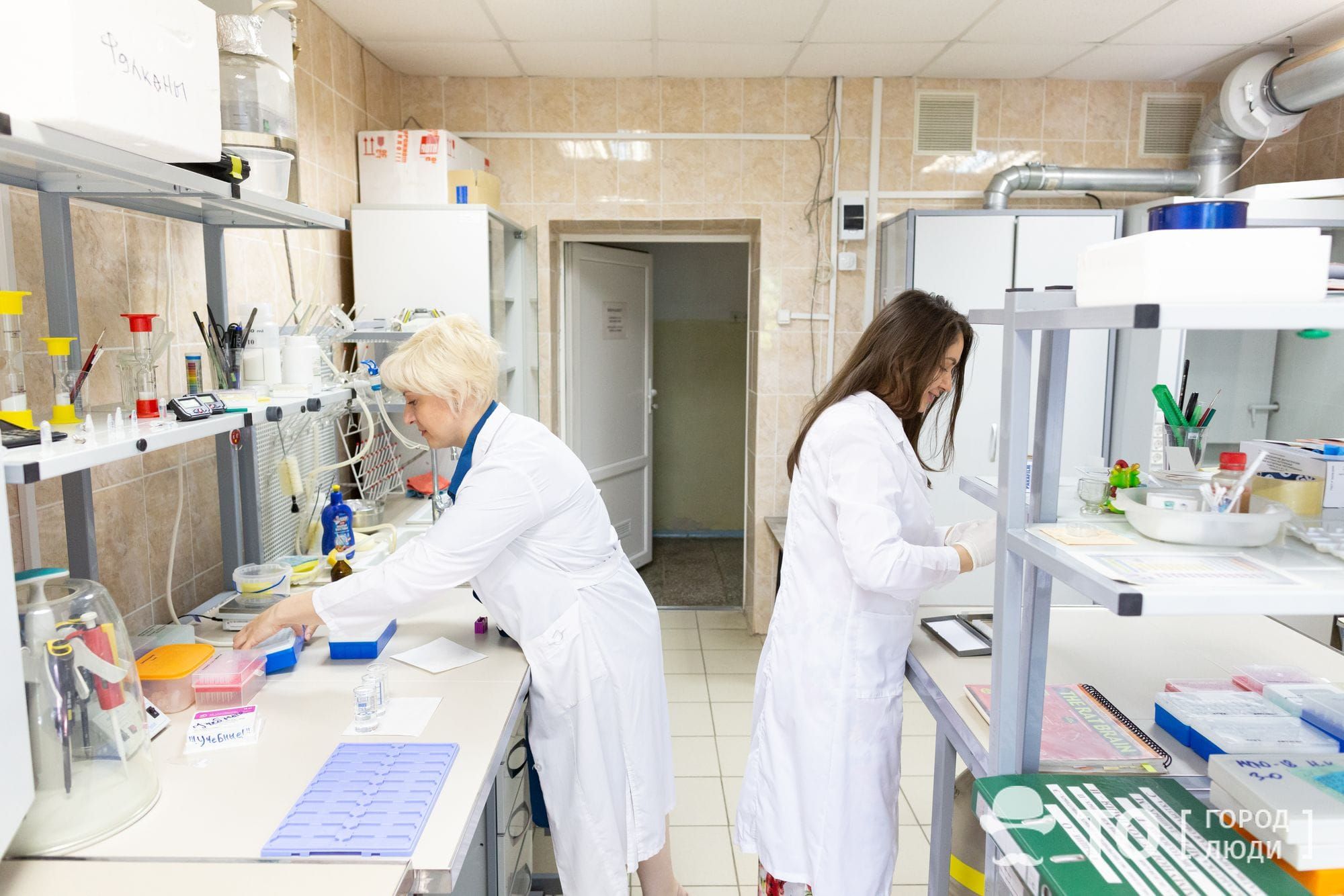 Laboratory Life. How Will the Center for Biomedicine and Biotechnology Help TSU Scientists?

Laboratory of Neurobiology of the Research Institute of Biology and Biophysics of TSU is one of 10-15 “core” laboratories that will be included in the Center for Biomedicine and Biotechnology, being created in Tomsk.

What this joint educational venture will imply, we have described in an interview with its coordinator Alexey Sazonov. Today we are telling you why the TSU international laboratory working at the biotechnological forefront is looking forward to the launch of the center. 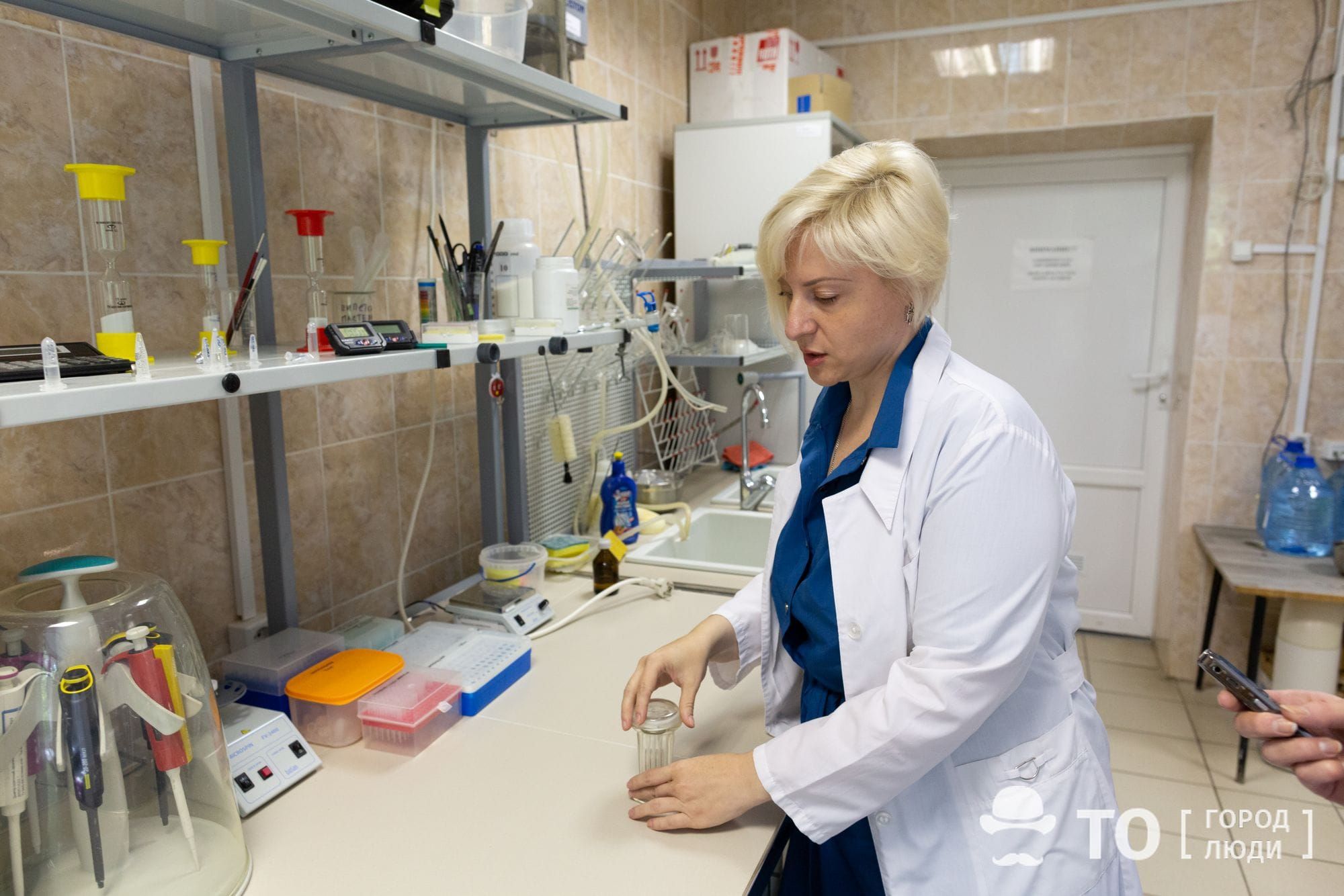 In the laboratory, the brain is being studied
Photo by: Veronika Beletskaya

The laboratory of neurobiology is headed by Marina Khodanovich, Doctor of Biological Sciences. The laboratory only has as much as 14 employees, but it is known throughout the world of bioscience due to the development of new methods of brain research in vivo.

Now the laboratory is hosted in several rooms of the Research Institute of Biology and Biophysics of TSU, in the University Grove; but the next year it is planned to move to the specially equipped building of the Center for Biomedicine and Biotechnology on Karl Marx Street. 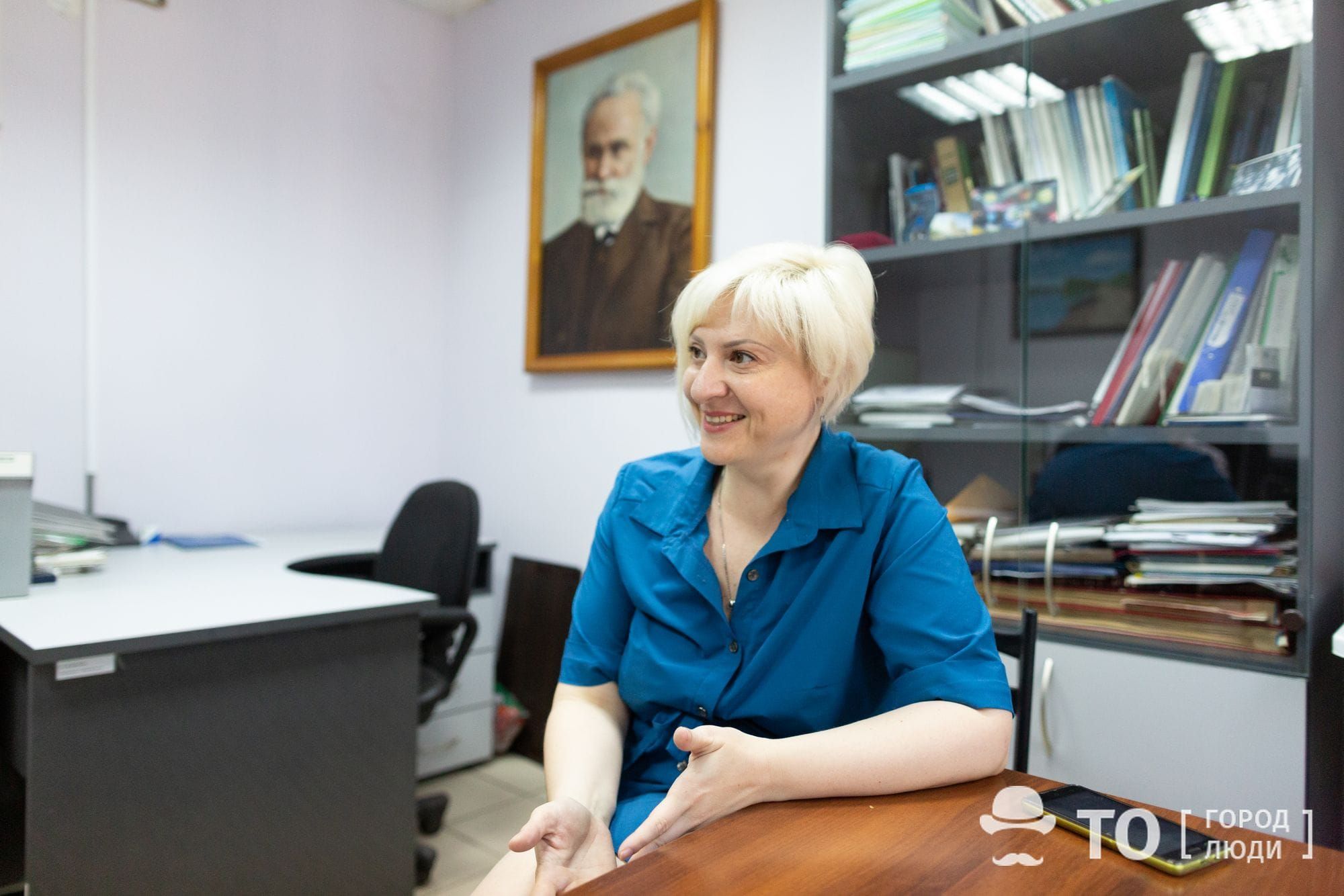 The main research area of ​​the laboratory is normal functioning and pathological conditions of the central nervous system of humans. Studying the features of the brain functioning after the brain hemorrhage, laboratory staff found that neurons are not alone to suffer the consequences of this vascular catastrophe. What is also destroyed is myelin sheath of axons, which allows neural impulses to go in the right direction, similar to the insulation of an electric wire.

Axon is a long cylindrical process of a nerve cell, along which neural impulses go from the cell body to the necessary organs and other nerve cells.

Myelin is a substance that forms an electrically insulating sheath (myelin sheath) around nerve fibers. Exactly this sheath is what covers the axons of many neurons.

Vasiliy Yarnykh, a professor at the University of Washington, a scientific advisor and head of several research projects being conducted in the laboratory, has developed a new MRI method for determining the amount of myelin in the brain. While conventional MRI allows determining the localization and size of the affected area of ​​the brain, the method of Tomsk scientists can accurately determine the degree of myelin loss and provide a prescription of an individual treatment, depending on the data obtained.

Also, the therapy can later be adjusted due to the dynamics of the myelin sheaths recovery. The research was supported by grants from the Russian Science Foundation and the state task of the Ministry of Education and Science. The method has been validated using laboratory animals, and the results have been published in reputable foreign journals, namely Scientific Reports and the Journal of Cerebral Blood Flow and Metabolism. Now the scientists are intending to start clinical trials and obtain a patent for the invention. 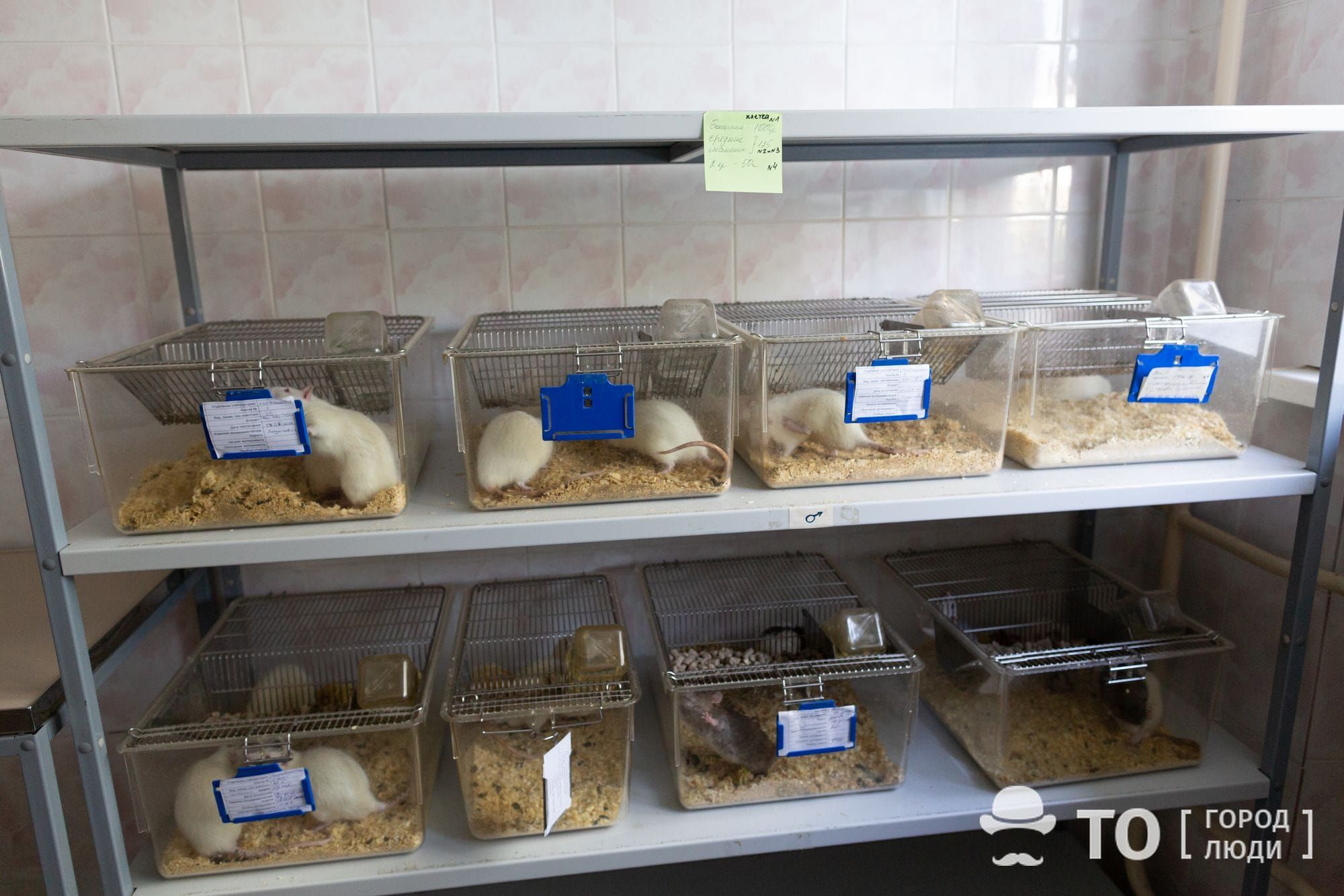 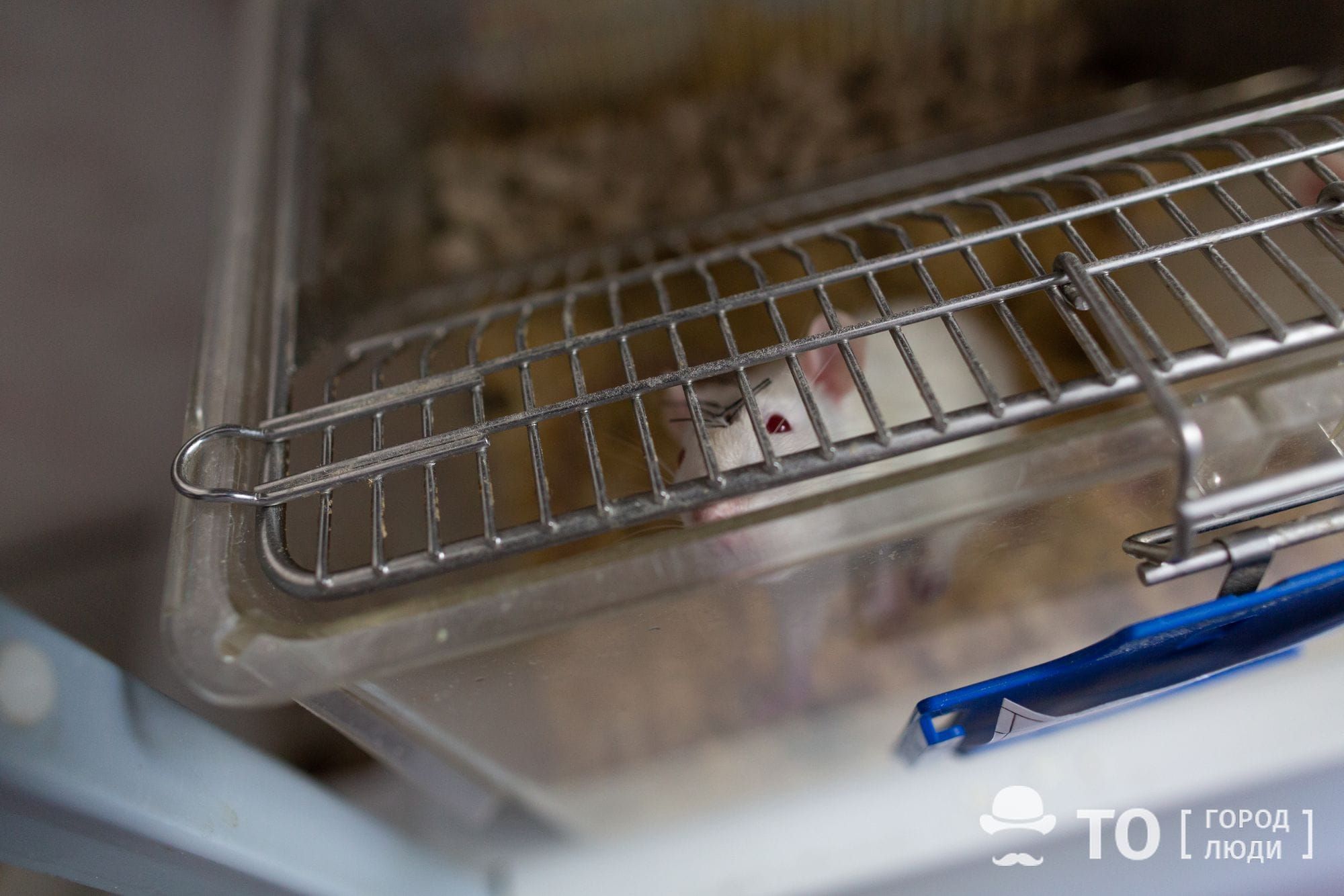 The new method helps to detect the myelin loss caused not only by hemorrhage, but by other diseases as well. One possible example is disseminated sclerosis. This is a disease difficult to study, with causation mostly obscure yet, that affects young people, sometimes even children. Sclerotic plaques affecting the brain are also, in fact, demyelinated areas. So, in the diagnosis of lesions caused by disseminated sclerosis, the method of the TSU biologists is also usable.

“Now they are inclined to believe that disseminated sclerosis is a multifactorial disease, like cancer,” explains Anna Pishchelko. “But while some types of cancer have already been examined as to be successfully genotyped and treated, the issues concerning disseminated sclerosis are much more complicated. It cannot be genotyped; a number of genes that can be involved in the occurrence of disseminated sclerosis, have been identified, but their presence alone is not enough, as other factors must also be included, namely metabolic, external and even social ones. We have already tested a new therapeutic approach to the DS (disseminated sclerosis) treatment, using laboratory mice (for more details, see an article in the Phytotherapy Research journal), and now, trying to understand the mechanisms of diseases, we decided to apply molecular methods of neurobiology.” 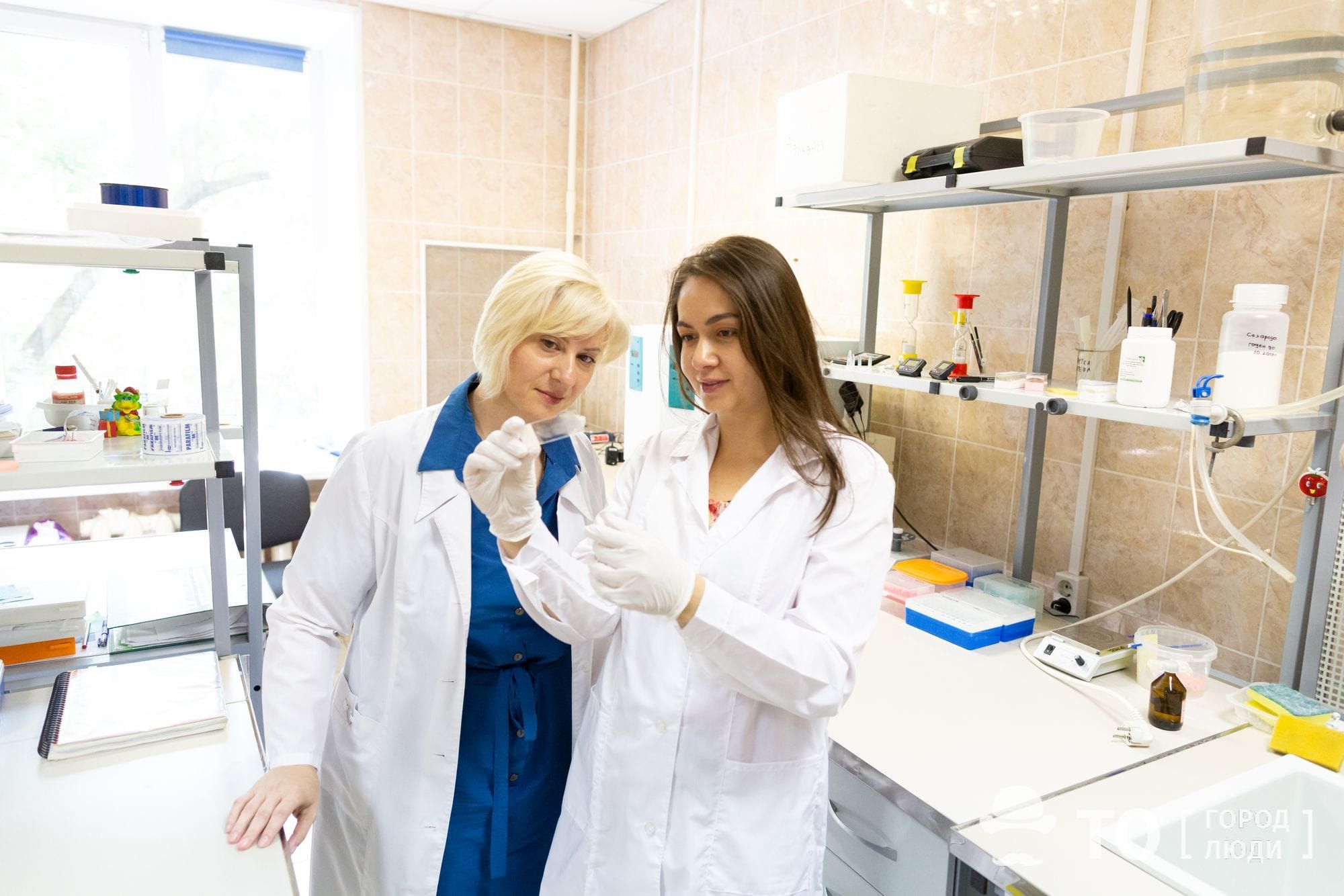 Modern neurobiology is based on molecular methods
Photo by: Veronika Beletskaya

Exploring the options for increasingly effective ways to rehabilitate patients with hemorrhages and other brain lesions, scientists are studying the process of neurogenesis – the emergence of new nerve cells. Dr. Anna Naumova, a colleague of Tomsk biologists from the University of Washington, and the Leading Research Fellow of the laboratory have proposed a way to detect young nerve cells in a living organism, using MRI system. In order to do this, its cells are labeled with a genetic vector.

“We have learned to insert a genetic vector into only young neurons and make them express the ferritin protein. This is more than just a depot of iron beneficial to the body, as what is particularly valuable for diagnostics is that iron-containing molecules can be seen with MRI,” says Anna. “Preliminary histological data have satisfied us, so now we are going to look how the method will show itself in MRI of laboratory animals. We expect it to prove itself in clinical practice, but in case of a human being, it will be necessary to choose another genetic vector that would be inserted intravenously.” 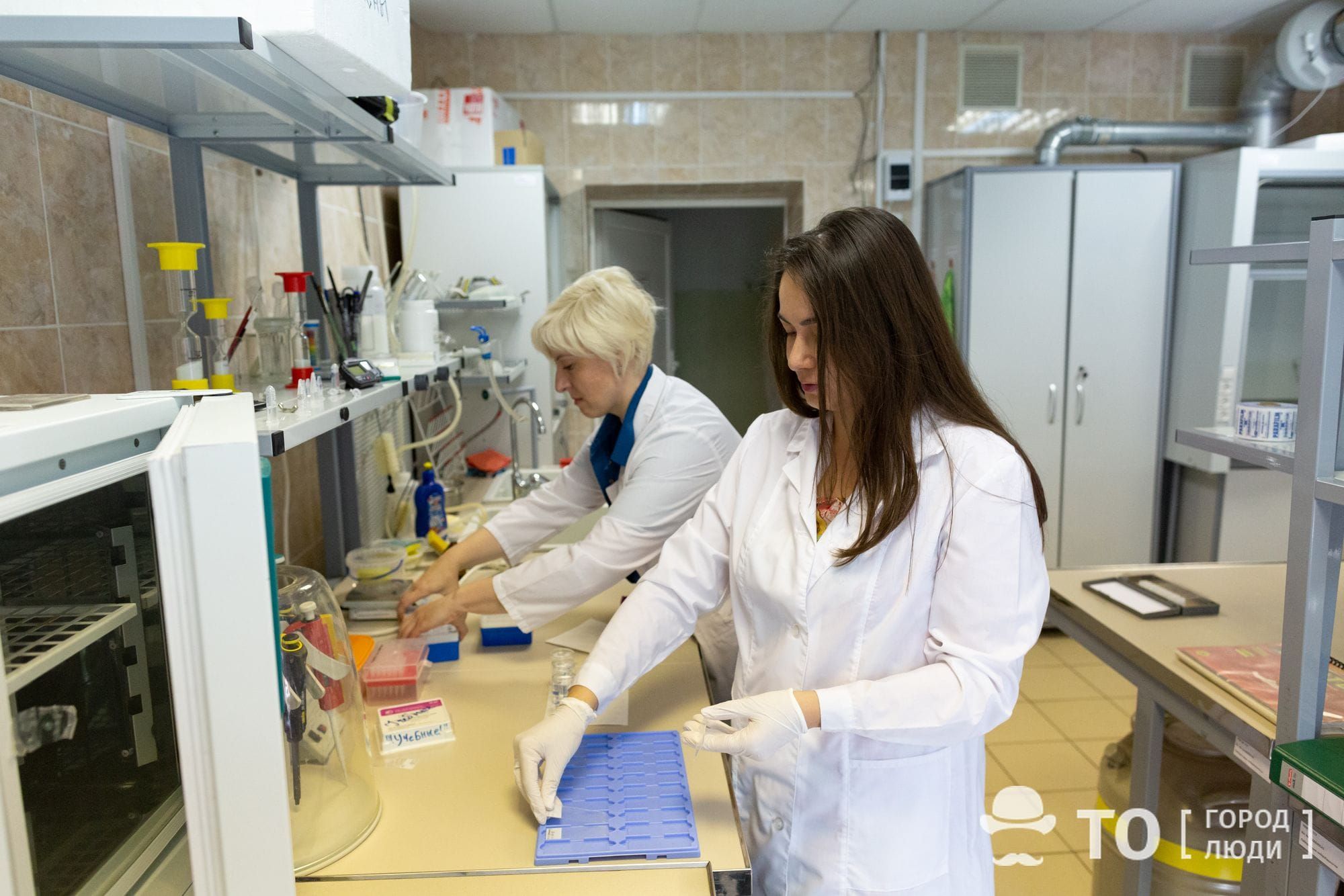 Prior to clinical trials, a series of in vivo laboratory tests using rats and mice are required. The difficulty is that in Tomsk there is no tomograph capable of providing high-resolution images necessary for research on rodents; the big “human” ones are not suitable for this purpose. In Siberia, the only MRI device for laboratory animals is located in Novosibirsk, and during an experiment the neurobiology laboratory staff, in nearly full, have to pay a visit there several times a month.

“In March, the Novosibirsk tomograph broke, and all the work on projects being carried out beyond the Urals stalled,” complains Anna Pischelko. “Alright for our colleagues who have grants newly received, they have time to wait. Meanwhile, we had already been working on our project for the second year, with most of the studies completed, and all that remained was to see if the method works in MRI. Still, waiting we were for the tomograph there to be repaired!” 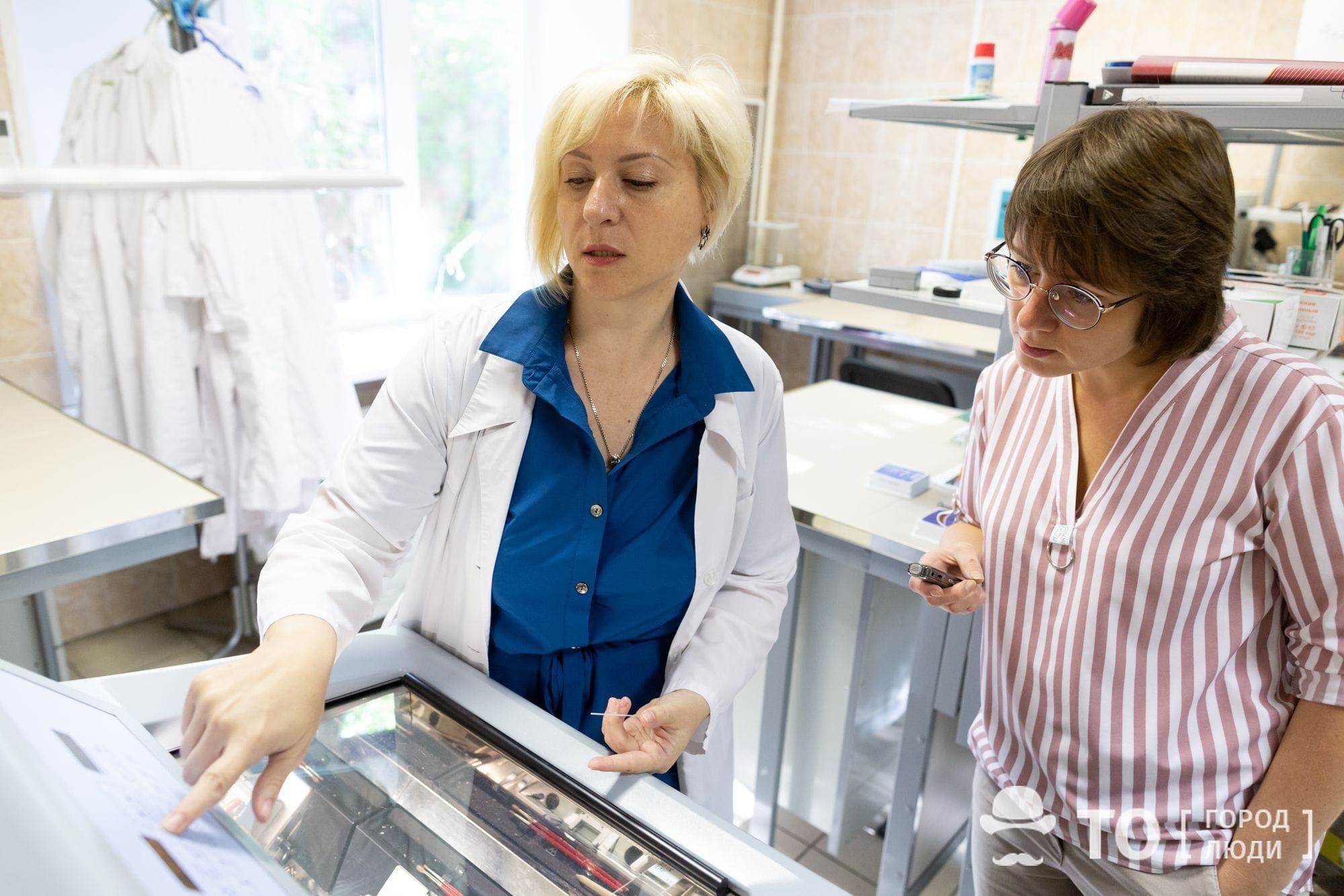 A cryotome – a tool for preparing the thinnest sections of biological tissue
Photo by: Veronika Beletskaya

The absence of a laboratory tomograph in Tomsk is not the only problem of the laboratory. Modern neurobiology requires expensive equipment, and even a large university is not able to acquire everything necessary for a small laboratory.

Scientists themselves admit the poor efficiency of installing equipment in each laboratory, conducting experiments and then leaving it inactive for many months while interpreting the results or working on another part of the project. 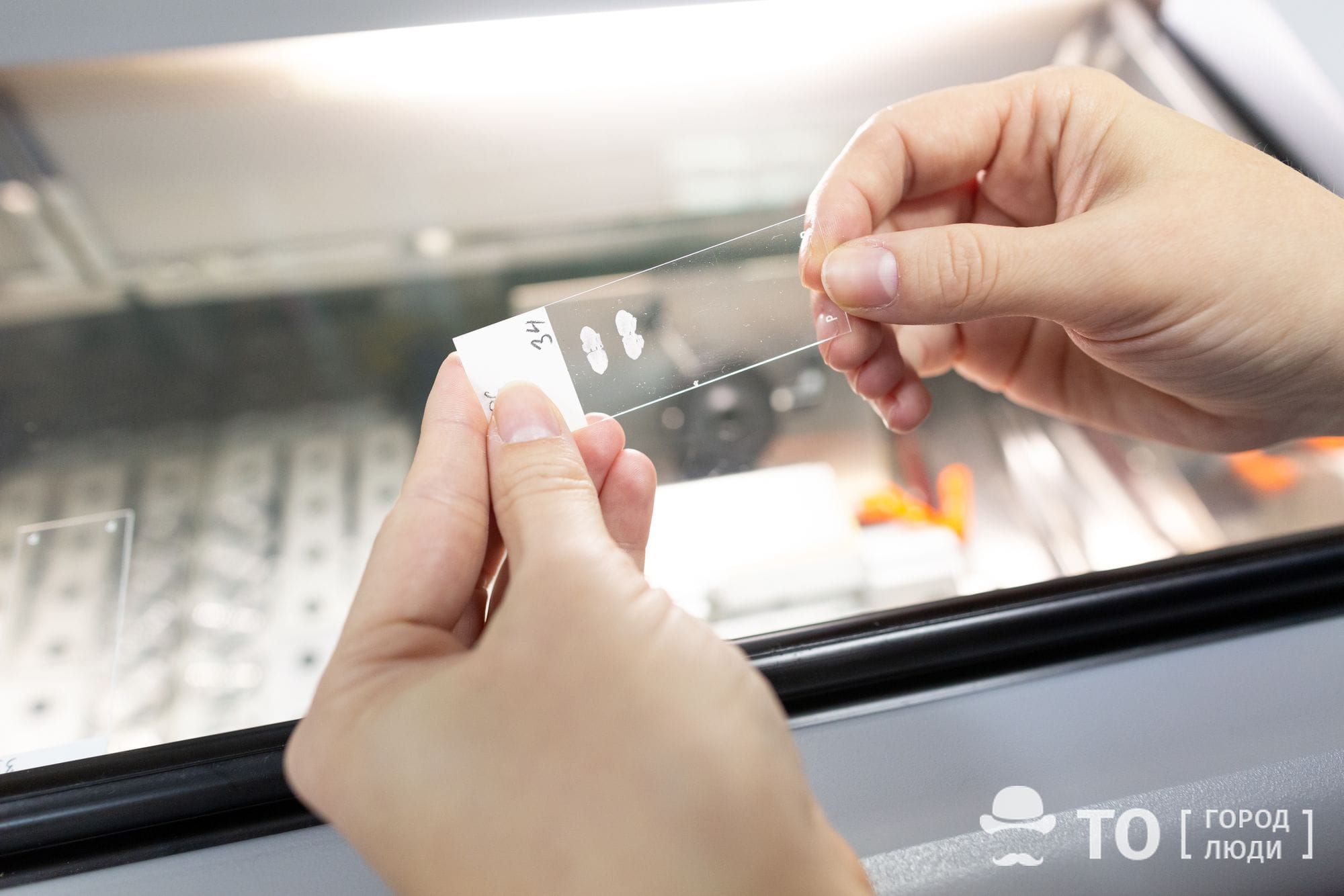 The section of a rat brain, made using a cryotome
Photo by: Veronika Beletskaya

The solution is the establishment of a Center for the Collective Use of Biotechnological Equipment, planned in the near future. It will contain the entire “molecular cuisine”: incubators for cell cultures growing, PCR (polymerase chain reaction) and sequencing devices, the equipment for confocal and luminescent microscopy, clean boxes, maintaining sterile conditions in which already requires certain time and financial costs from the staff. Among other things, the acquisition of a magnetic resonance imaging unit for experimental animals, the second beyond the Urals, is also being discussed. 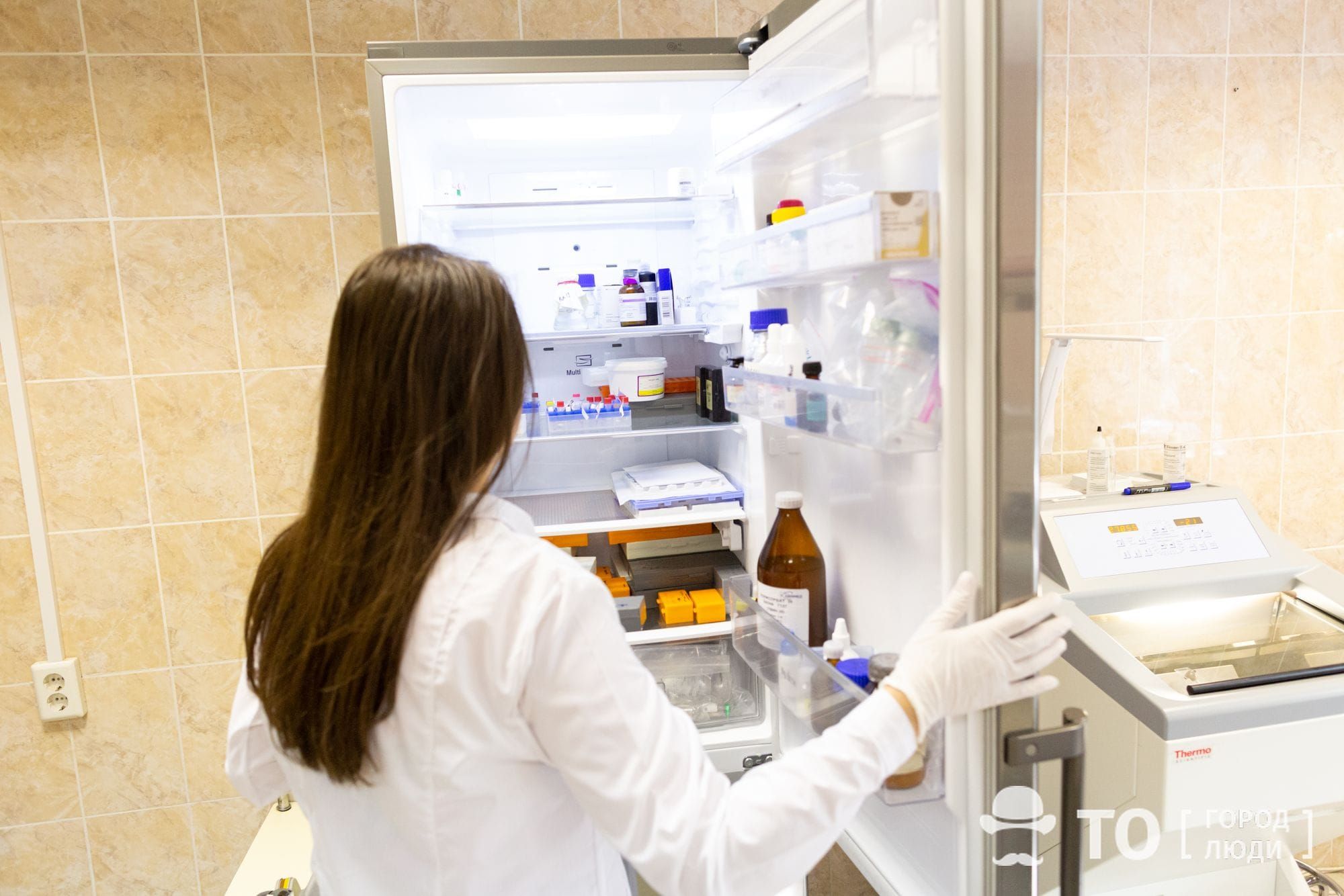 The collective use center implies not only equipment, but also methodological support and highly qualified technical personnel
Photo by: Veronika Beletskaya

In addition to equipment, another possibility being considered is that the Collective Use Center will also provide data processing programs (quite expensive per se) and the services rendered by qualified technical personnel. This will also allow scientists to use in their activities the methodological solutions of the highest possible level. 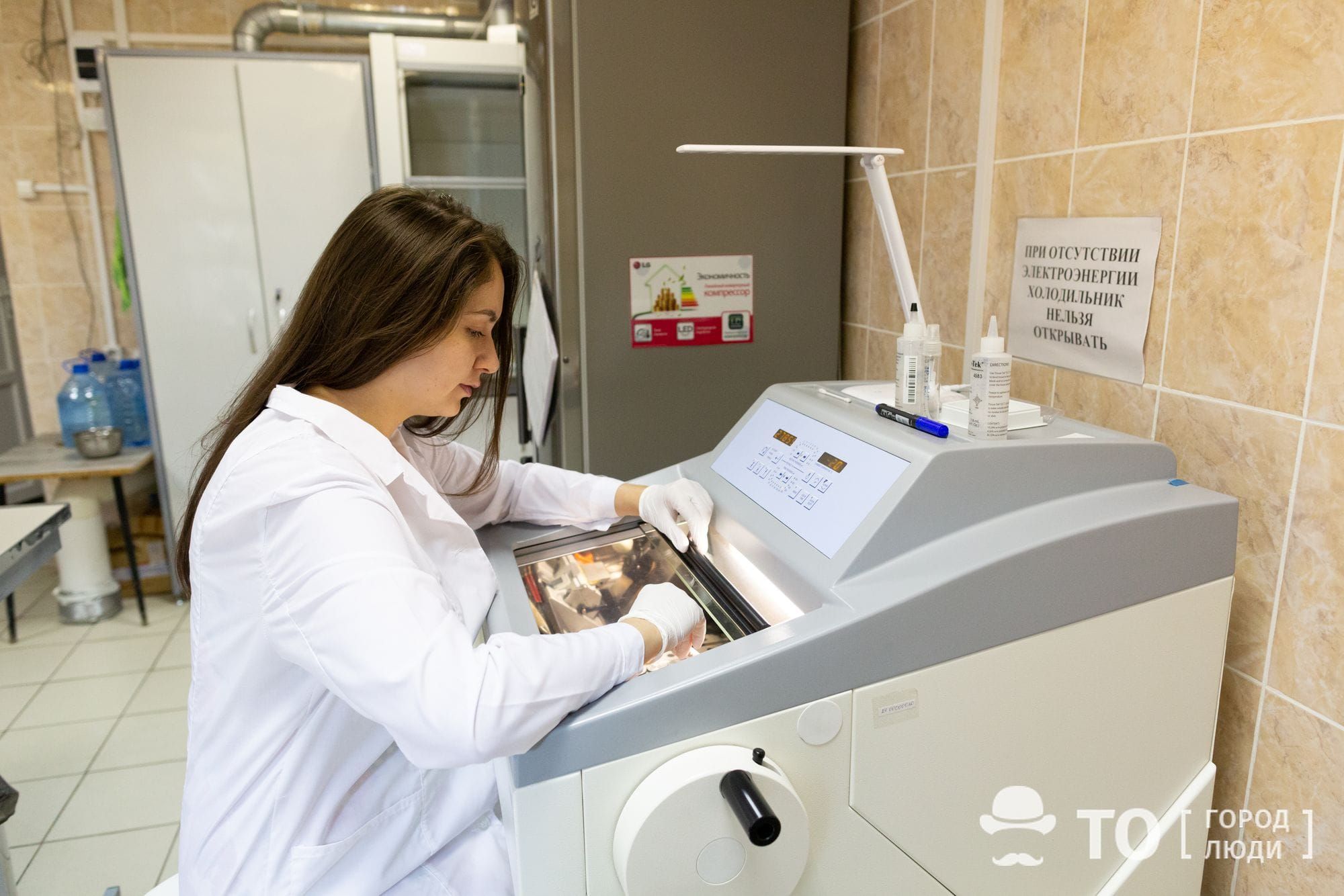 Marina Kudabaeva – not only a graduate student of Biological Institute of TSU, but also a member of the scientific team of the laboratory
Photo by: Veronika Beletskaya

The Center for Biomedicine and Biotechnology will provide collective access not only to equipment, but also to united educational space. It is planned to create a “School of Engineering Biology”, an inter-university Master’s program. Students will be able to practice in the most advanced laboratories, while scientists will receive the best interns who can eventually become their young colleagues.

“Our team is small, so there is a need for new employees,” says Anna. “We need young scientists, we need geneticists. Many foreign students come to our professor Vasily Leonidovich Yarnykh, but so far we cannot initiate an international Master’s program at the university. However, according to the idea by ​​Alexey Sazonov, when operating as part of the Biomedicine Center, we will be able to take candidates for Master’s degree from several universities and attract teachers from abroad. Then the international Master’s program will become possible, providing kind of export education, so to say.” 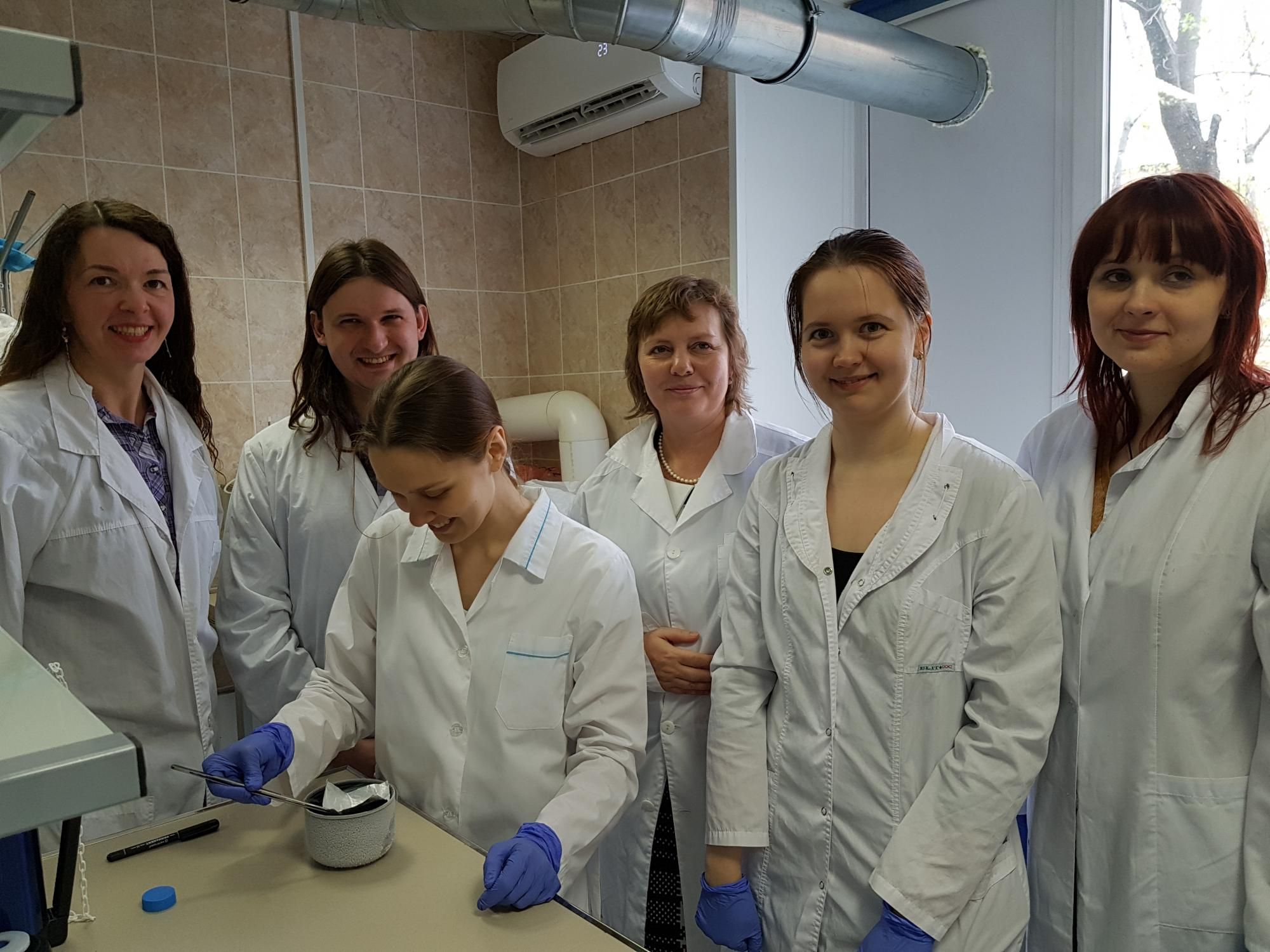 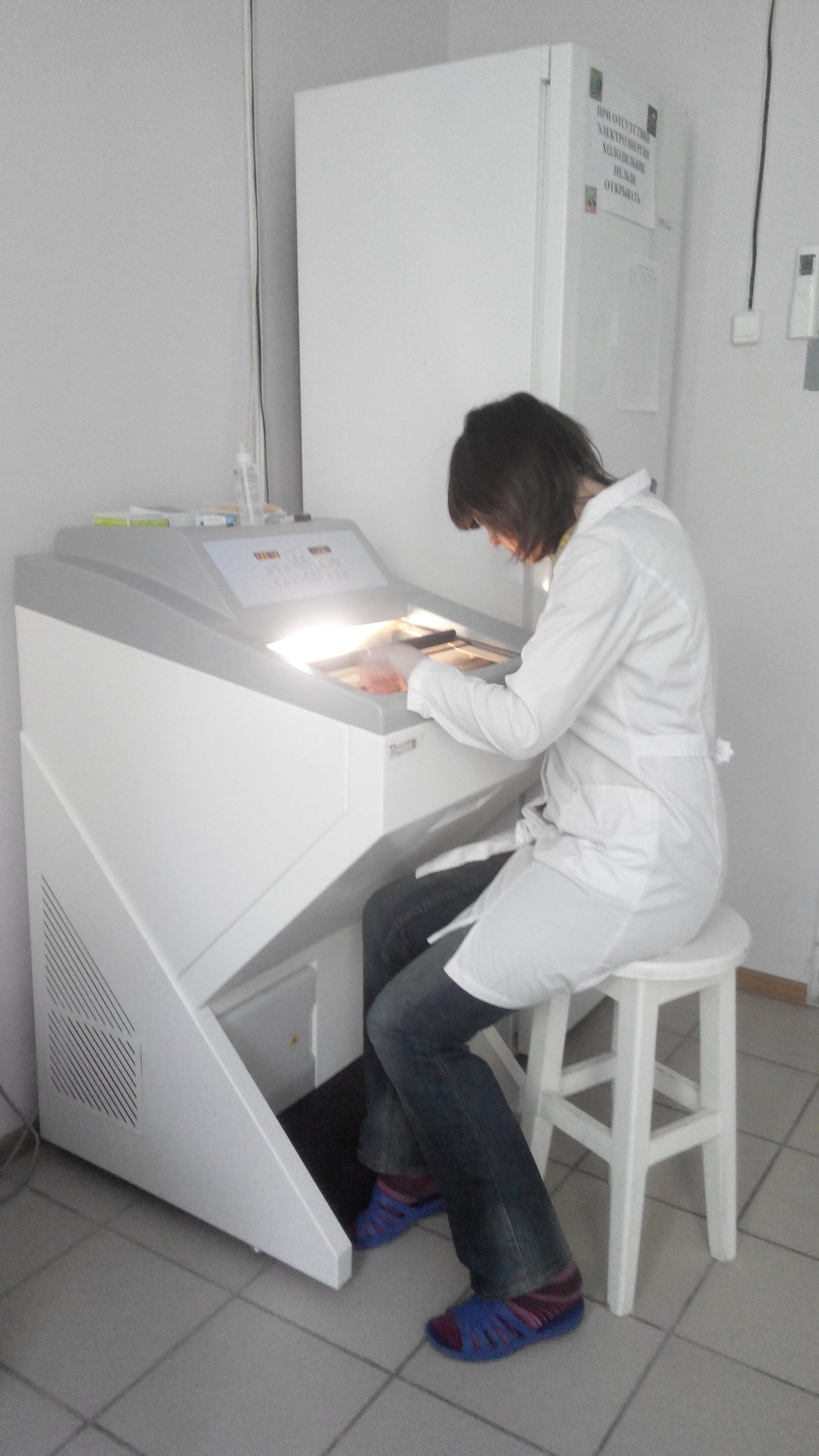 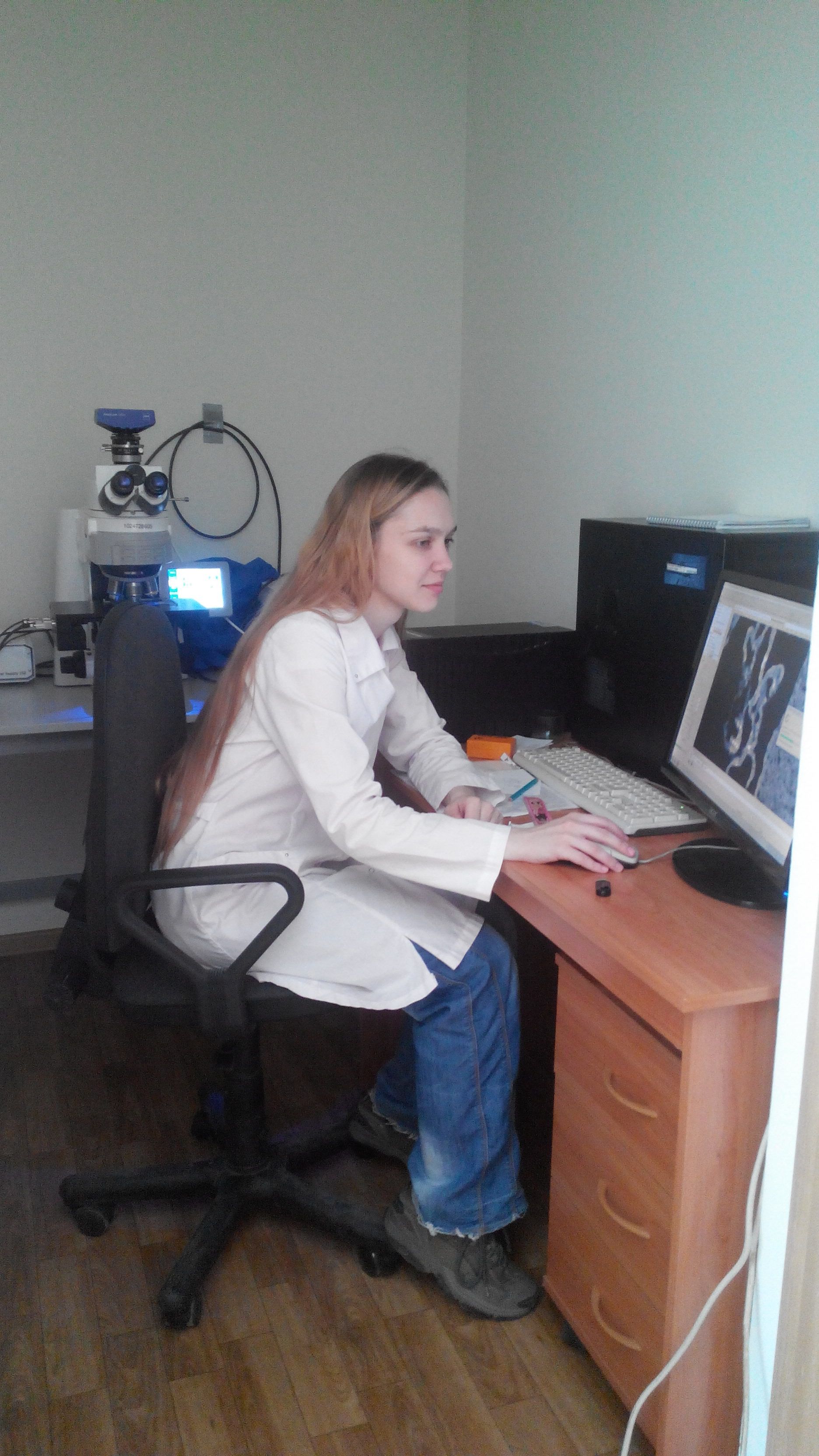 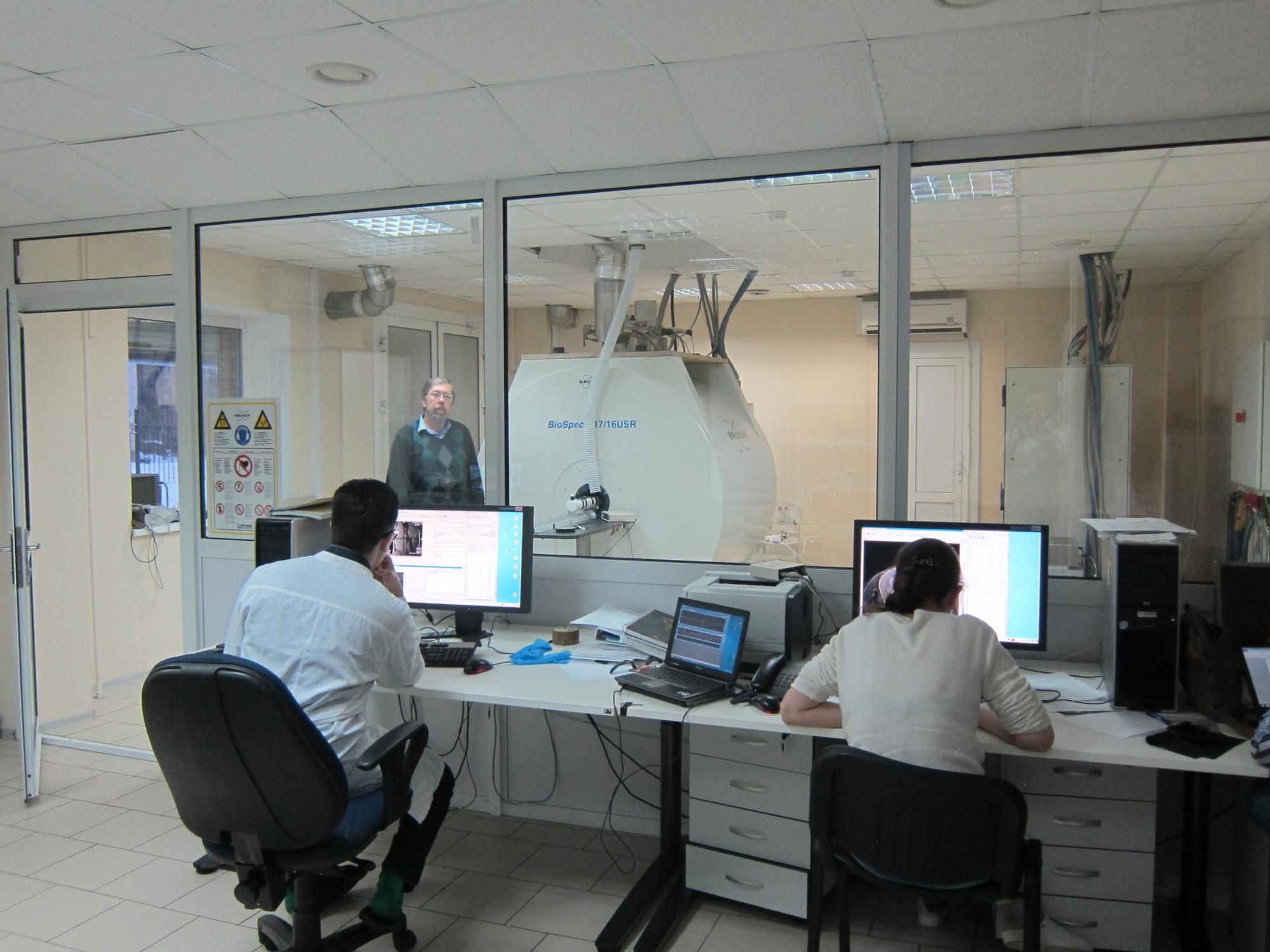 1. Part of the laboratory staff
2. Yana Tyumentseva, Laboratory Assistant
3. Alena Kisel, a postgraduate student, Junior Research Fellow
4. Tomograph in Novosibirsk. V. L. Yarnykh (in the background)
Photos from the archive of the Laboratory of Neurobiology, Research Institute of Biology and Biophysics of TSU

In addition to providing laboratories with scientific personnel, the Master’s program will also procure additional financial income. Also, the needs of laboratories and partially of the Center itself will be met through grants and implementation of commercial projects. But this is to be done by the engineering center and start-up enterprises, while the core laboratories will still be engaged in fundamental science. 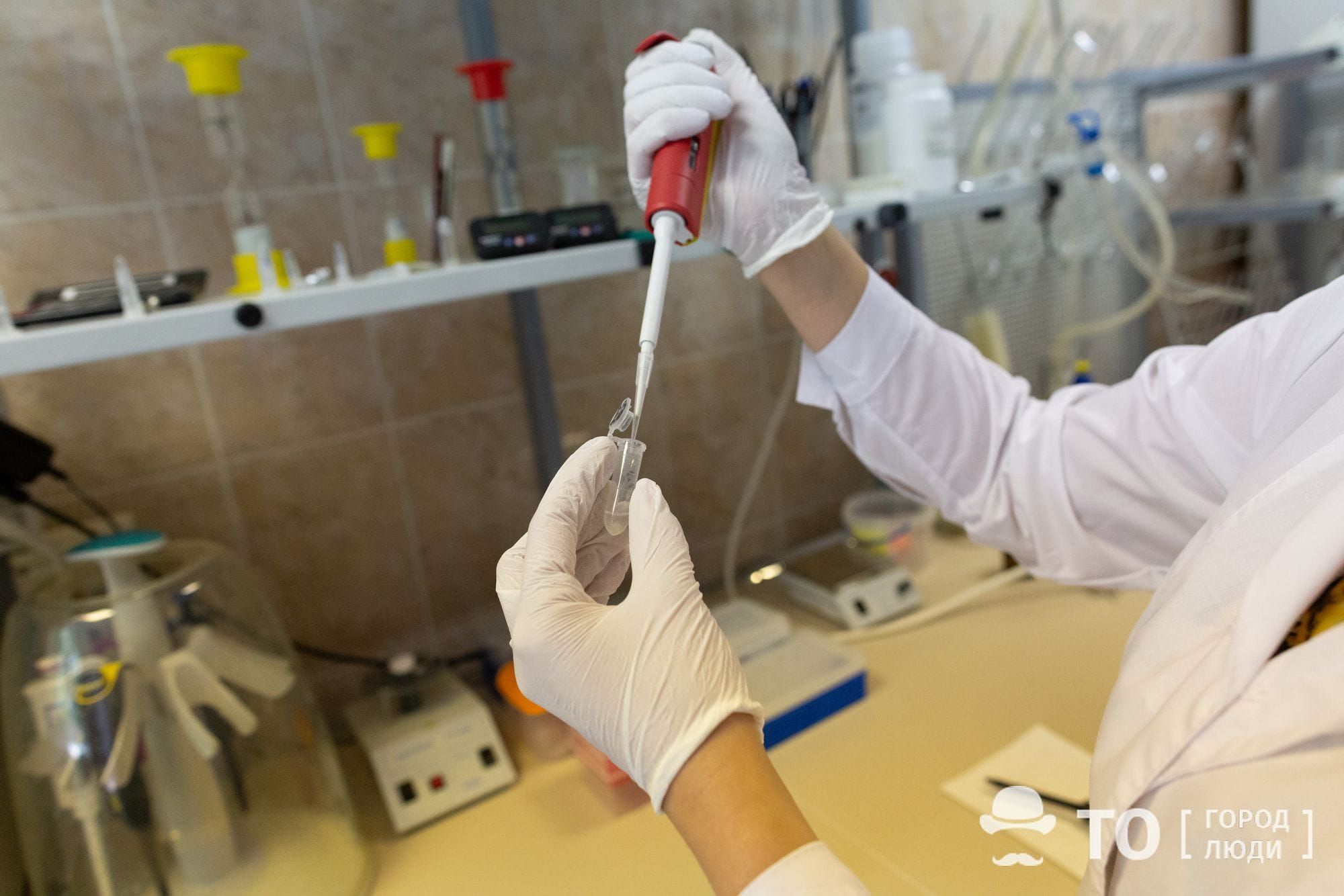 As part of the Biotechnology Center, the laboratory will keep doing pure science
Photo by: Veronika Beletskaya

“It is valuable for the city, for the scientific laboratories of Tomsk, which are known worldwide. The creation of such a center for collective use will take the Tomsk bioscience to a higher level, this is a new evolutionary step,” says Anna Pishchelko, an employee of the neurobiology laboratory.

Her colleagues agree – everyone is looking forward to the launch of the Center for Biomedicine and Biotechnology.